How Much Should You Train During Injury?

Most of the issues I deal with when managing people with injuries stem from them not having the right information. You can find the heart of a lot of issues in health and fitness that stem from information, or lack thereof. So what follows is an attempt to put some less wronginformation out there for you to consume.

It seems that there are two rough groups that I deal with on a day to day basis as a physio and strength and conditioning coach.

Before we start, I am in no way proposing that everyone fits into these two categories. I hate reductionism and would be the first to warn against it. But, for us humans who inherently have poor appreciation for complex concepts, spectrums are nice to deal with. So the above two groups sit on either end of an injury-behaviour spectrum, that is either helped or hindered by health professionals, strength and conditioning coaches and fitness professionals of all types. The below ‘categories’ are taken from a well-known physiotherapist Adam Meakin – The Sports Physio.

Setting the background of your injury

Because sport is varied, training load is varied but the following concept can broadly be applied to all training programs. Originally proposed in rugby league by Gabbett et al in 2005, this concept is critical to understanding why some injuries may happen. It isn’t the whole puzzle, but it closely links to what you might want to think about following an injury. In a landmark paper in 2016, Tim Gabbett made clear an important relationship between an athlete’s acute to chronic workload ratio (Ref). This has long been an observable trend in other sports like rugby union (Ref), cricket (Ref), baseball (Ref) and is now backed up by approximately 60 studies across many fields like military and first responder occupations (Ref).

You’ll see in the graphic below that there is a well defined ‘sweet spot’ of this acute:chronic workload ratio, established over years of data gathering by Tim Gabbett (Ref,Ref). This sweet spot exists in the range of about 0.8 to 1.3, which if you follow this through to a reductive solution, basically means that what you’ve done in the last week of training should be roughly equal to the average week you’ve done in the last 4 weeks. But importantly what this DOESN’T mean is that you need to do the same thing for your entire training career. It means this ‘sweet spot’ concept guides you to avoid spikes and troughs in load – increasing or decreasing the intensity of your training (or your workload) too rapidly. 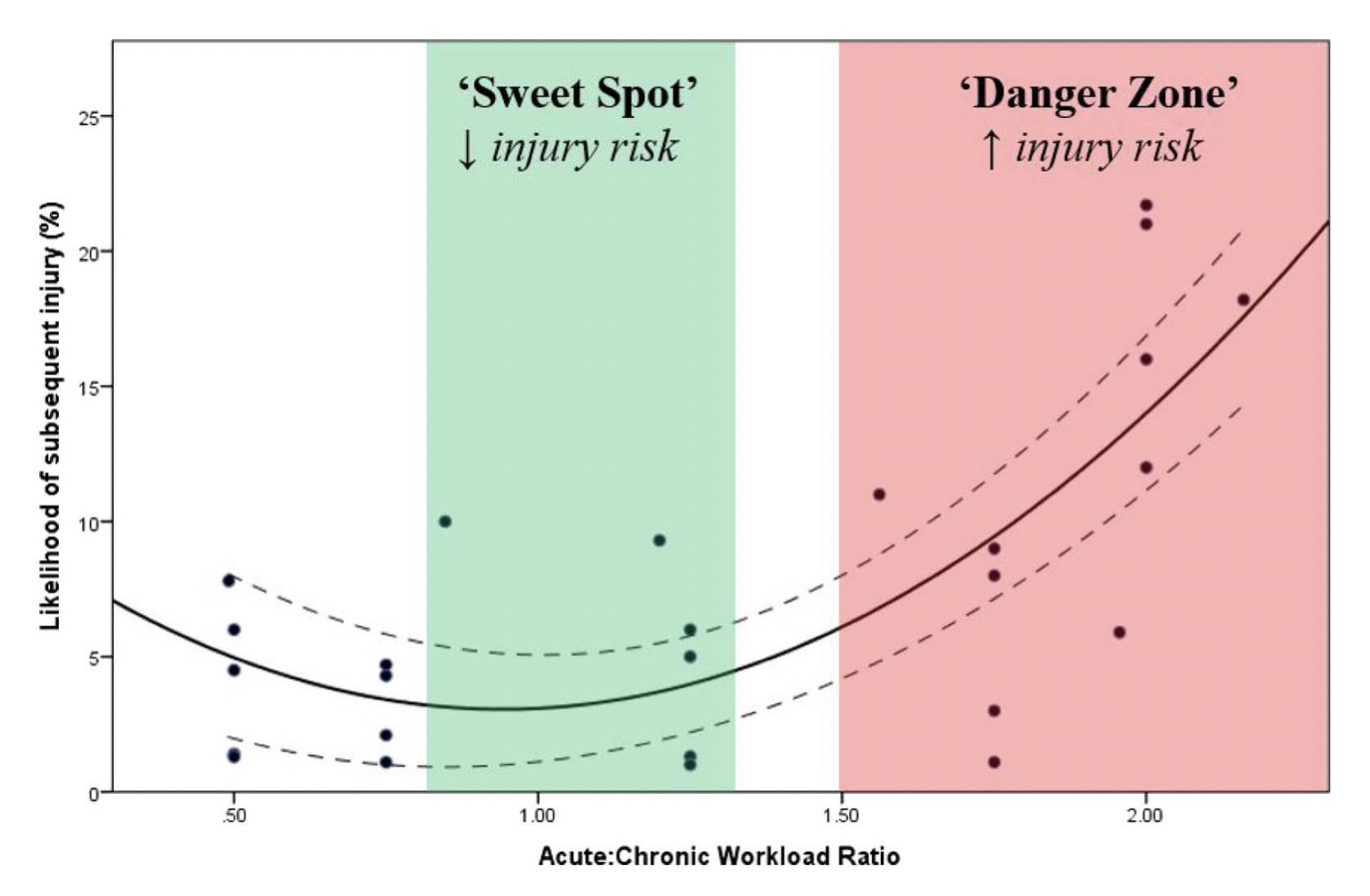 There are a few key takeaways from the above information:

Resting for too long results in a de-training effect, pushing your chronic workload down (training loads go way down), which in itself has been shown to result in an increased injury risk (Ref, Ref,Ref). Not to mention, doing nothing results in losing strength, and weaker athletes have been shown to be at increased risk of injury (Ref, Ref) AND re-injury when returning to play (Ref). What it might look like if you don’t train during an injury then is as follows: 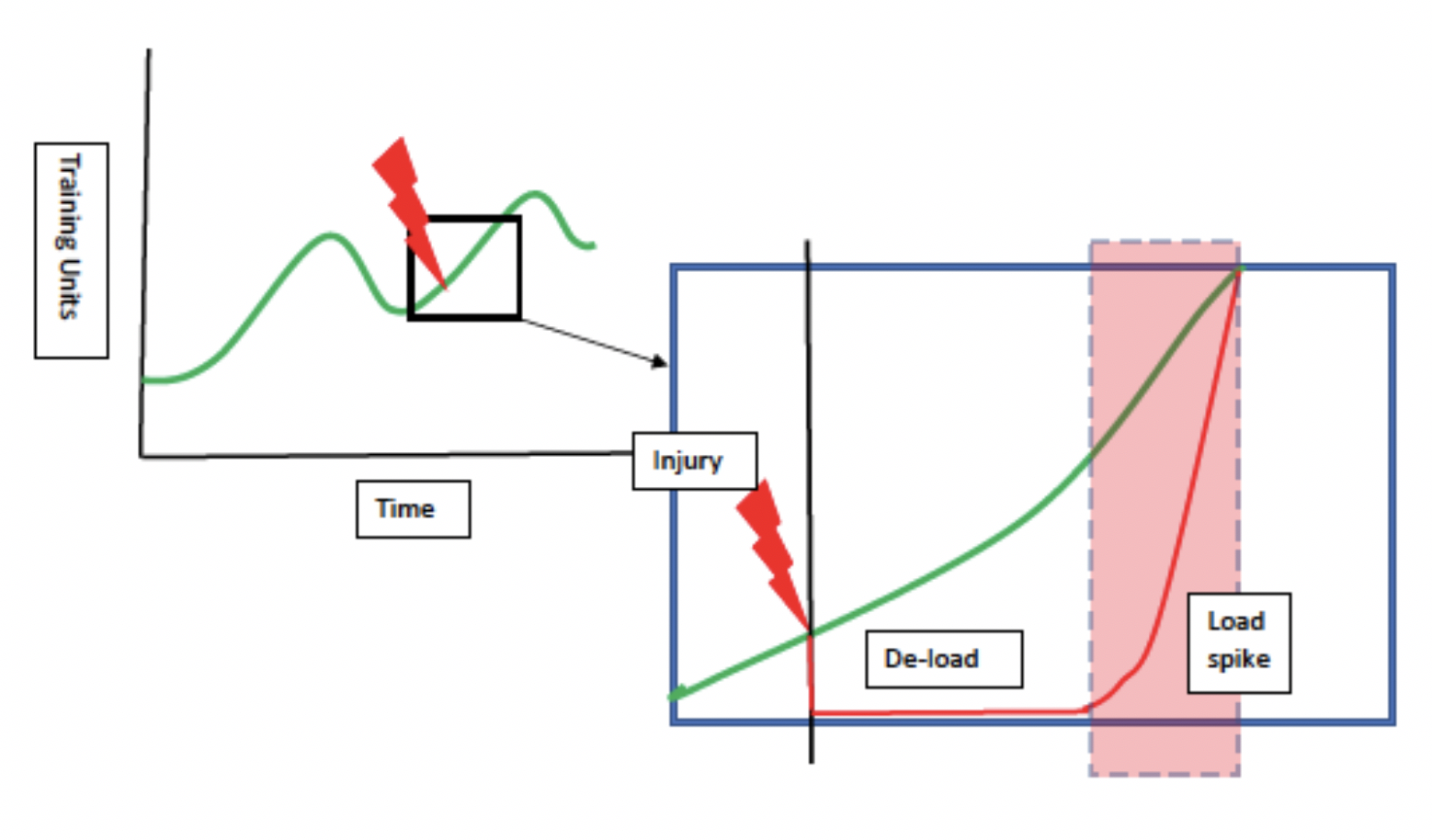 Progressing back into your sport or activity after this time off may result in a ‘spike’ in load that we’ve learnt is associated with increase risk of injury.

In injury risk modelling, the simple fact of having a previous injury puts you at an increased risk of injury (Ref, Ref, Ref). And this may be due to lots of reasons, but one could be the practice of missing out on important training load and a ‘spike’ in load when returning from injury.

So let’s take a closer look at the initial group of people that I encounter following an injury;

1.  People who do too little following an injury; the perils of rest

Rest and recovery are essential to performance (Ref) and are some of the very first things you should receive advice on from a health professional immediately following an injury. So please don’t hear what I’m NOT saying.

What I’m NOT saying here is that you can’t miss sessions and you need to catch up your training load, because that is a recipe for disaster. But if you don’t train enough during the course of your injury and rehabilitation, you are placing a bet and putting all of your money on red in a game of roulette. A better option is to spread out your risk, and continue to load where possible.

Some key practical takeaways for this group are:

2. People who do too much following an injury; no ‘she won’t be right mate’

This approach is an altogether different story to deal with, and one which comes with its own set of issues. Once again, rest and recovery are absolutely key ingredients in any athletic performance or training program. Make sure you take it seriously, because if you don’t recover well, you are literally training for nothing. Your body needs a surprisingly long time to recover from a normal workout, let alone an injury (Ref).

“Besides, there has never been any convincing evidence that more is better; better is better (Ref, Ref).”

I know better than most that rest and recovery following an injury are a somewhat difficult pill to swallow, but it is an integral process to let the body do what it is best at – adapt and heal. For a nice read on theart of resting read here.

Overtraining may also present a risk of preventing the injured area from healing properly. However, on this point I would like to comment that many health professionals are often too quick to strike fear in the hearts of patients with this, which adds to the general public’s confusion about their body and their training. Call this a common sense approach; if you know something is hurting, it’s not rocket science, it just means the body is letting you know about the need to take a look at your training practices. I’m not saying it isn’t complex and doesn’t require some help from a health professional, but I am saying it’s nothing to be scared or confused about, because it’s well within everyone’s grasp to understand and self-manage in the future.

Some key practical takeaways for this group are:

Training during your injury is important and the risks of doing nothing then spiking your training load in returning to the field or track are real. But, if you don’t give your body the time it needs to recover, then it can’t heal what you have injured. If both of these extremes can do some simple things to meet in the middle a little more, we could have a whole lot less business on our hands, which in my view is a good thing.

The above documents a really simplified version of looking at load and injury risk. When looking at injury risk and load management it is really important to understand that we have so many variables, which interact in all sorts of different ways, that it becomes incredibly complex really quickly. So at the moment, our best evidence really isn’t all that good at appreciating the entire problem, and it may soon be proven to be incorrect. But at the moment, it is the best approach we have. Always take injury risk and load management information with a pinch of salt as it is incredibly individual and depends on a lot of contextual factors like your training history, your stress levels outside of training, the time and temperature and many, many more (Ref)

Tara is a graduate of the University of Western Ontario where she completed a four-year Honours degree majoring in Kinesiology with a minor in Rehabilitation Sciences in 2010. She then went on to complete her Masters of Science degree in Physical Therapy at Queen’s University in 2013.

Tara is a competitive athlete who has participated in everything from sprint distance triathlons, to full marathons. Previously, she was a competitive dancer and choreographer at both the regional and national levels.

She believes in maintaining a healthy lifestyle through fitness and activity and wants to help ...

More posts by the Author »