…Is it a one-way ticket back to preinjury sport and optimal performance?

We recently published a paper in the American Journal of Sports Medicine entitled “Return to Sport and Performance After Hip Arthroscopy for Femoroacetabular Impingement in 18- to 30-Year-Old Athletes: A Cross-sectional Cohort Study of 189 Athletes” (1). This blogpost serves as a short summery of the key findings.

Femoroacetabular impingement syndrome (FAIS) has recently been defined in the Warwick Agreement as a motion-related disorder of the hip joint due to either cam and/or pincer morphology (2). FAIS is the most common diagnosis related to longstanding groin pain leading to surgical management (3)– most often using an arthroscopic technique.

While several papers show improvements in hip function after hip arthroscopy for FAIS, a recent paper from our facility lead by Kristian Thorborg (4), observed that the majority of patients do not reach reference values in hip and groin function, including sport/recreational ability, measured with HAGOS (Copenhagen Hip and Groin Outcome Score) at 1-year follow-up. Despite these observations, several systematic reviews have indicated a high return to sport rate of 74-95% after hip scope for FAIS. 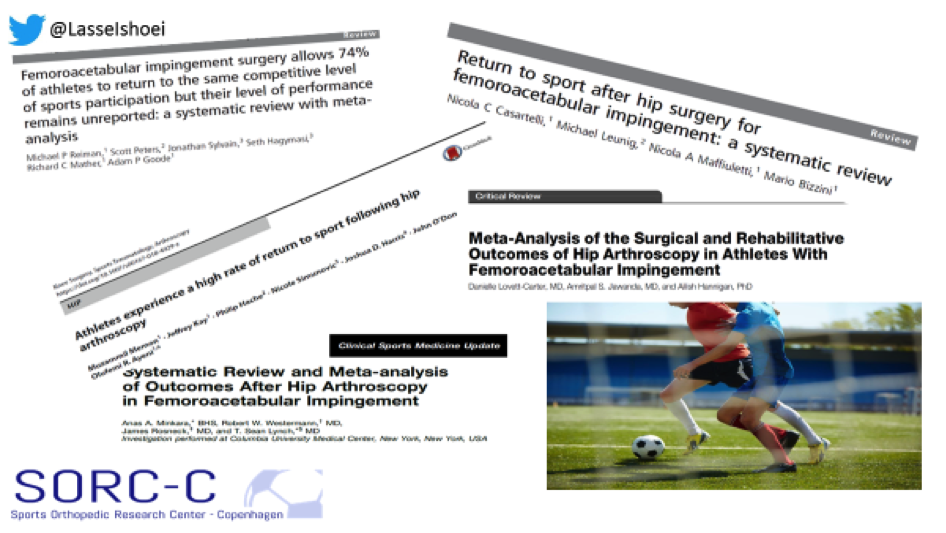 However, systematic reviews are only as solid as the included studies, which often are associated with several limitations likely to affect the return to sport rate, such as: 1) poor and unclear definition of return to sport, and 2) surgery performed at high-volume hip arthroscopy centers by a single world-renowned surgeon. Furthermore, sport performance, which is often the most important parameter for athletes have rarely been investigated.

Therefore, we designed a study to investigate the rate of return to preinjury sport at preinjury level in athletes and associated sport performance following hip arthroscopy for femoroacetabular impingement syndrome. To overcome previous limitations associated with poor/unclear return to sport definitions and a single surgeon we: 1) defined return to sport as “return to preinjury sport at preinjury level” and assessed sport performance in accordance with a recent consensus statement on return to sport (5), and 2) included 189 athletes from 11 centers in Denmark using a nationwide registry (6). 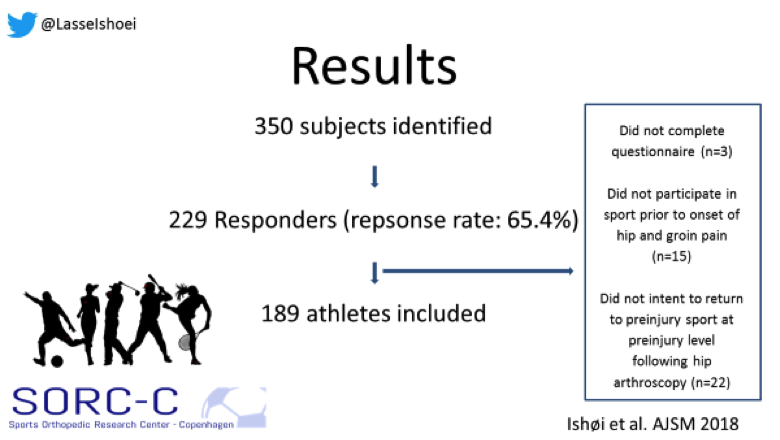 The main finding of the study was that 108 of 189 athletes (57.1%) were engaged in their preinjury sport at preinjury level at the time of follow-up (mean follow-up time: 33 months). 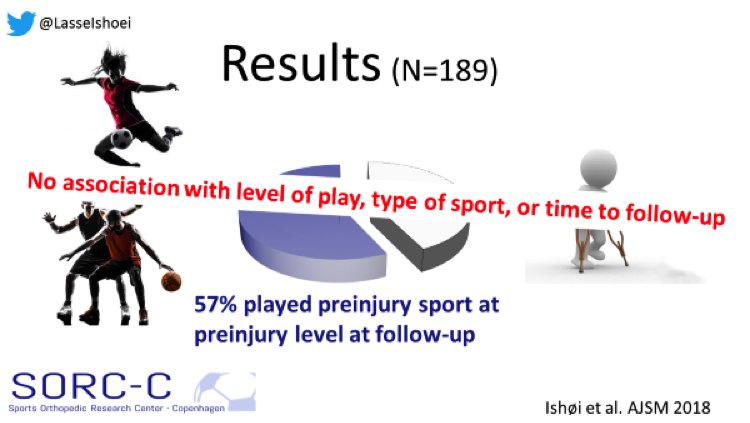 Furthermore, of those 108 athletes engaged in their preinjury sport at preinjury level, 32 athletes (29%) reported optimal sport performance, whereas almost half of the athletes reported impaired performance and restricted participation, that is, unable to participate in all aspects of the sport (eg. match play or high-speed running).

Of the athletes who did not return to return to preinjury sport at preinjury level or obtained optimal performance, the majority (>90%) reported this to be due to persistent hip and groin pain. 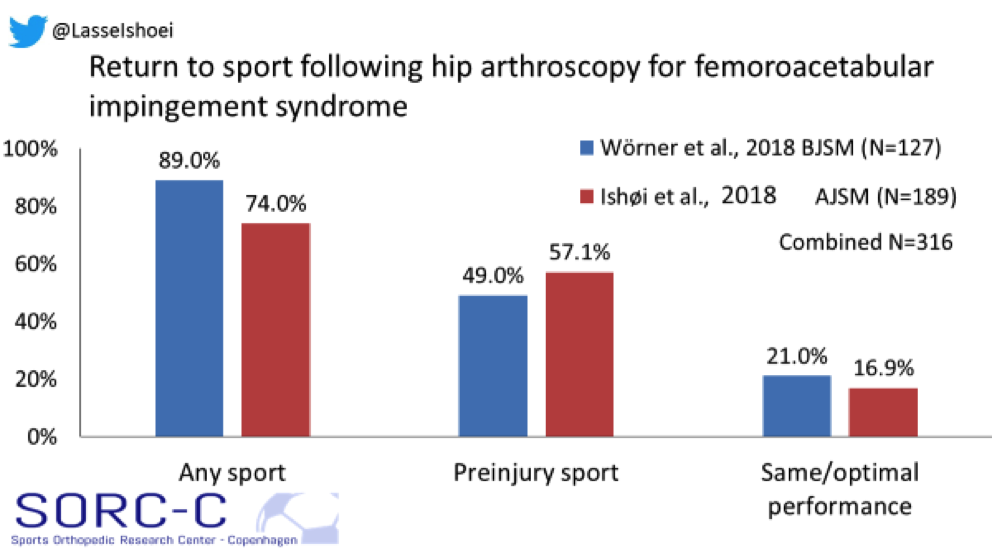 In conclusion, our study shows that while a large proportion of athletes return to some form of sport, 57% return to their preinjury sport at preinjury level and of those only 1 out of 3 athletes corresponding to 17% of the total cohort return to optimal performance (1). Thus, hip arthroscopy may not be a one-way ticket back to sport as previously suggested (8).

Tara is a graduate of the University of Western Ontario where she completed a four-year Honours degree majoring in Kinesiology with a minor in Rehabilitation Sciences in 2010. She then went on to complete her Masters of Science degree in Physical Therapy at Queen’s University in 2013.

Tara is a competitive athlete who has participated in everything from sprint distance triathlons, to full marathons. Previously, she was a competitive dancer and choreographer at both the regional and national levels.

She believes in maintaining a healthy lifestyle through fitness and activity and wants to help ...

More posts by the Author »